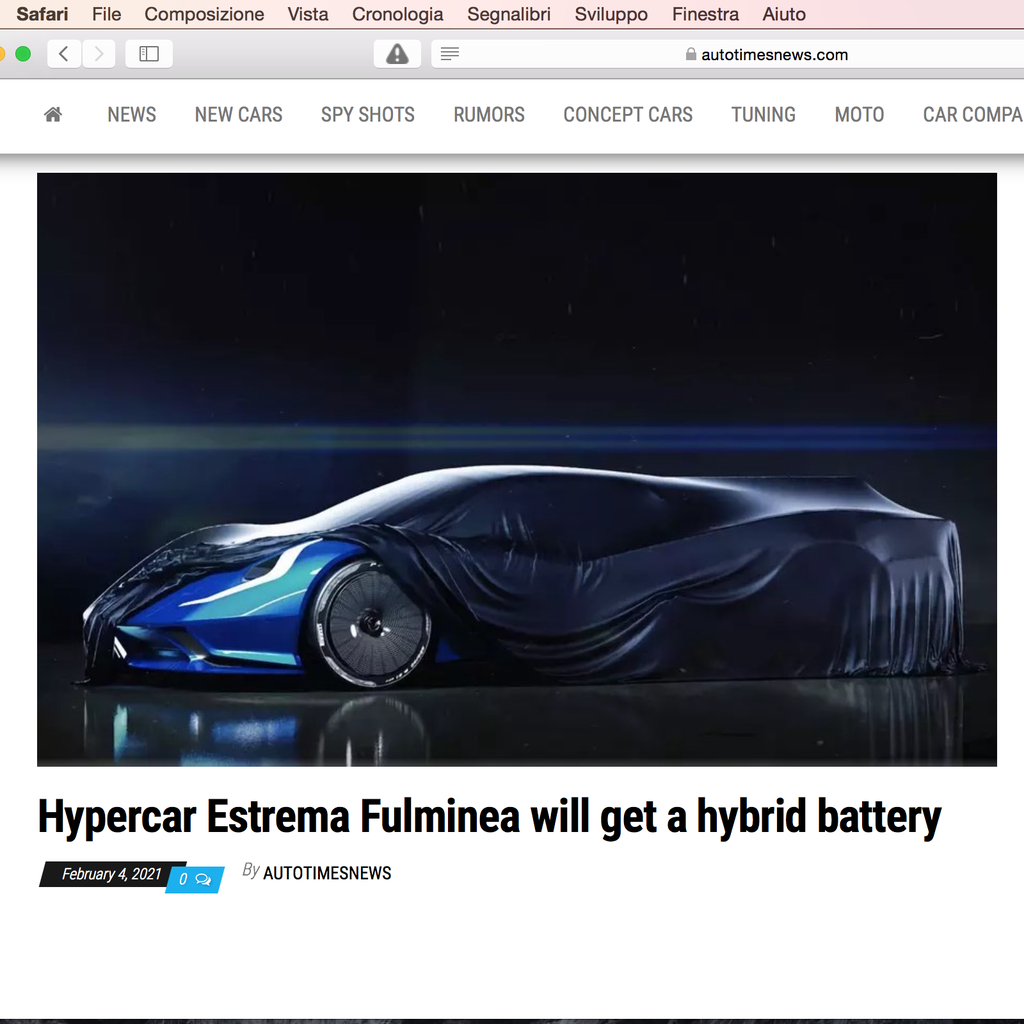 Hypercar Estrema Fulminea will get a hybrid battery

Estrema Fulminea will be the most powerful production car ever

Automobili Estrema is about to surprise the world with a new electric hypercar. The newest car will receive the Fulminea name and a unique hybrid traction battery. The extreme coupe will be limited to 61 pieces.

Automobili Estrema, headquartered in Modena, Italy, was founded in 2020 by entrepreneur Gianfranco Pizzuto. In the past, he has worked with Fisker Automotive as an investor and partner, and Jaguar Land Rover Italy as an ambassador for the I-Pace electric crossover. But in general, Pizzuto calls himself an automobile consultant, and his new company – a boutique automaker.

The debut project of the new niche brand will be the Fulminea electric hypercar (translated from Italian – instantly, lightning fast), which will challenge Aspark Owl and Lotus Evija. The coupe will receive a power plant of four electric motors with a total output of 2,040 horsepower and the world’s first hybrid traction battery. It will consist of supercapacitors and solid state electrolyte cells provided by Avesta Battery Energy Engineering. We’ve already seen something similar on the NAWA Racer concept bike.

The 100 kilowatt-hour units will be assembled by Estrema’s partner IMECAR Elektronik. The Italians expect to achieve a specific capacity of 450 watt-hours per kilogram, and keep the mass at 300 kilograms. For comparison: the energy density of classic lithium-ion cells is 200-260 watt-hours per kilogram. On a full battery, Estrema Fulminea will travel about 520 kilometers (WLTP cycle), and accelerate to 320 kilometers per hour in less than ten seconds.

Fulminea was originally printed with 61 copies. Manual assembly will be set up at a facility in Modena. Interestingly, the corporate color of the car is the blue Azzurro Savoia, the color that previously symbolized the House of Savoy, the family under which the unification of Italy and the creation of the Italian kingdom took place. The adjective Estrema in the company’s name refers to the poet Gabriele d’Annunzio, who wrote a letter to Fiat founder Giovanni Agnelli in 1920 and explained why the car can only be feminine. D’Annunzio believed that cars are inherent in grace and some frivolity, and they are also very seductive. 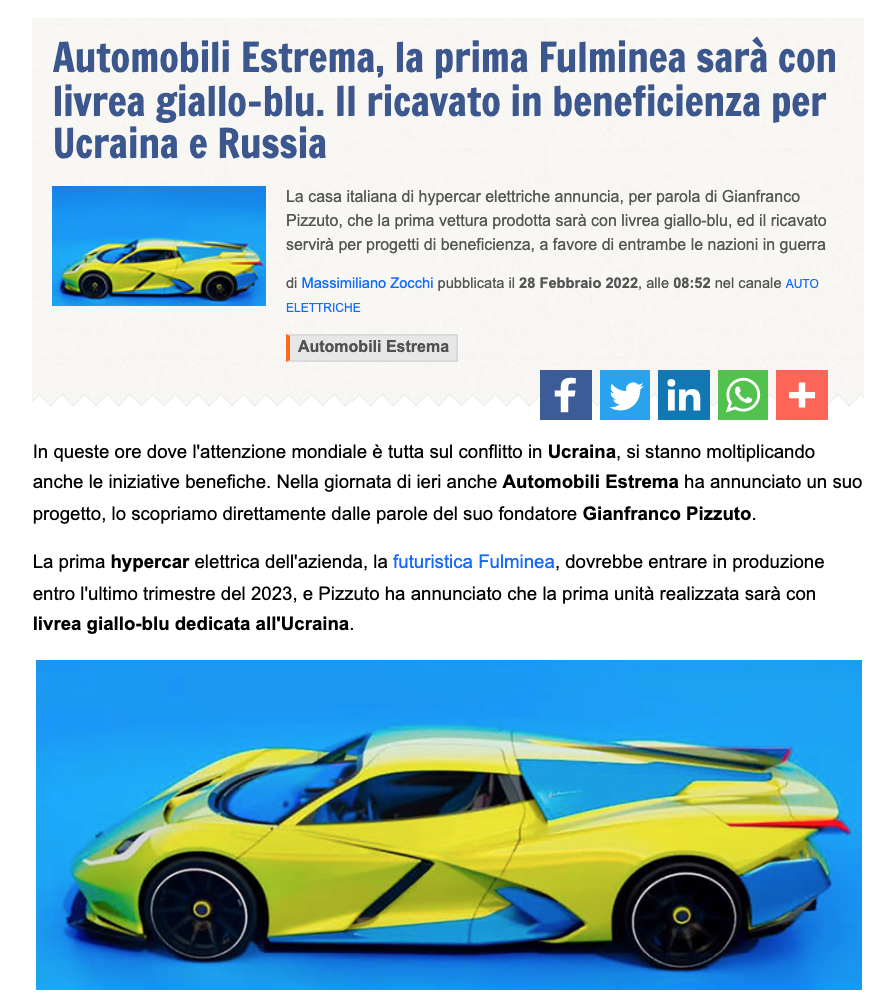 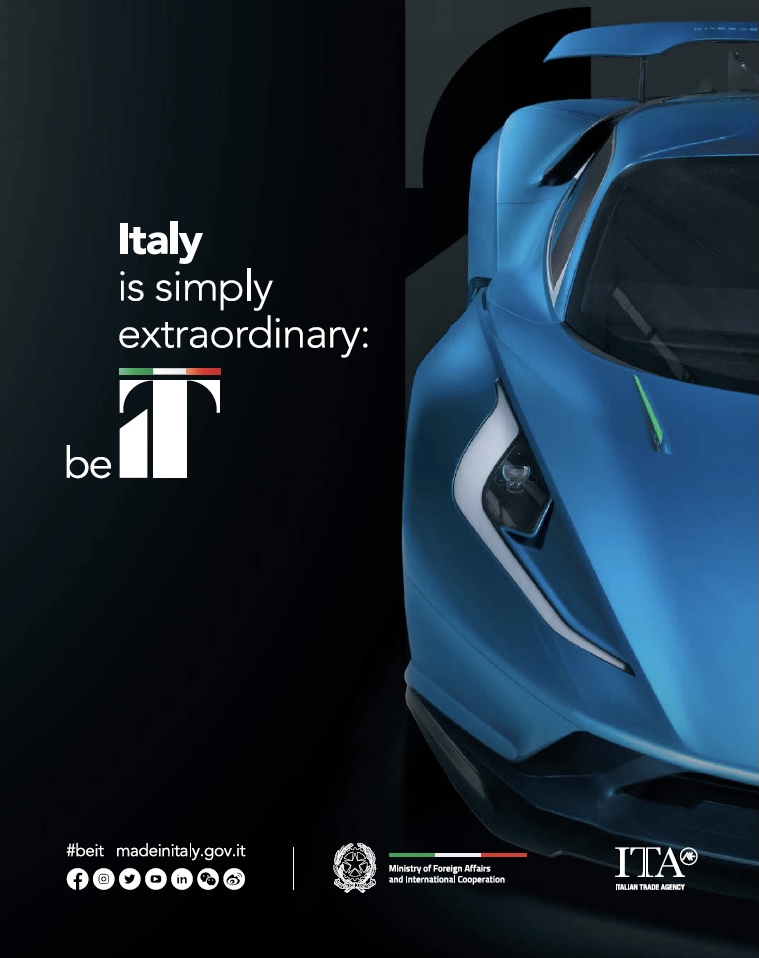 Italy is simply extraordinary: be IT 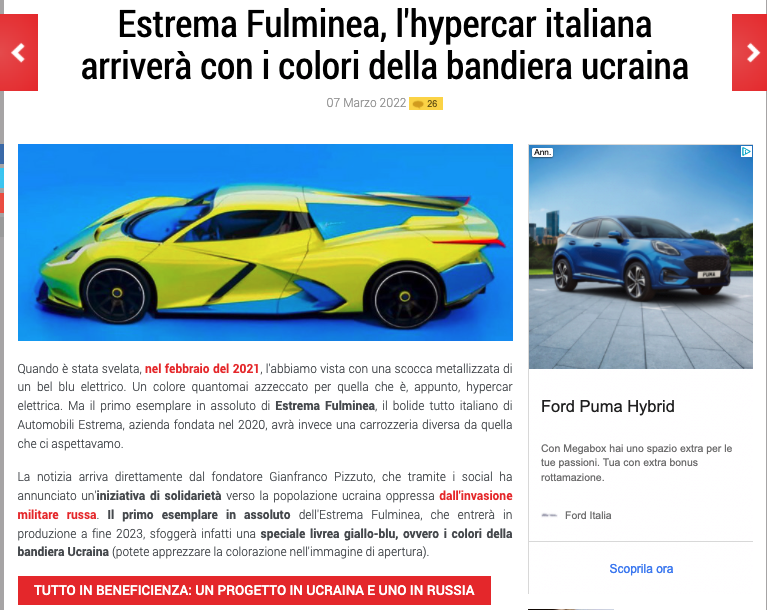 7 Mar alle 4:17 pm
Menu
This website uses technical and third parties profiling cookies to send advertising messages in line with the user's online navigation preferences. By proceeding you agree to the use of these cookies.
Cookie settingsACCEPT
Manage consent

This website uses cookies to improve your experience while you navigate through the website. Out of these, the cookies that are categorized as necessary are stored on your browser as they are essential for the working of basic functionalities of the website. We also use third-party cookies that help us analyze and understand how you use this website. These cookies will be stored in your browser only with your consent. You also have the option to opt-out of these cookies. But opting out of some of these cookies may affect your browsing experience.
Necessary Sempre abilitato

Performance cookies are used to understand and analyze the key performance indexes of the website which helps in delivering a better user experience for the visitors.

Analytical cookies are used to understand how visitors interact with the website. These cookies help provide information on metrics the number of visitors, bounce rate, traffic source, etc.

Advertisement cookies are used to provide visitors with relevant ads and marketing campaigns. These cookies track visitors across websites and collect information to provide customized ads.

Other uncategorized cookies are those that are being analyzed and have not been classified into a category as yet.